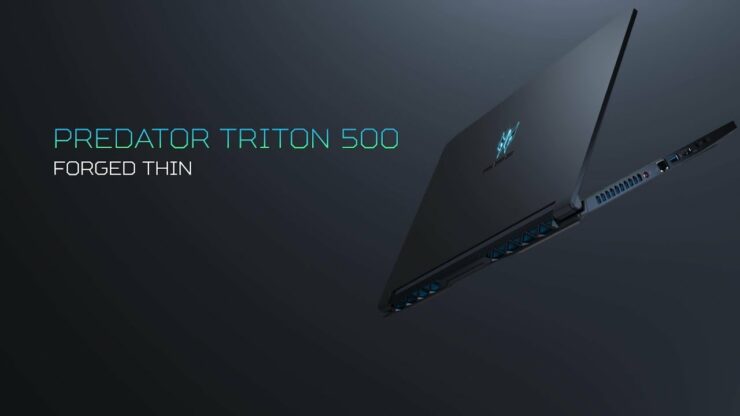 The Core i7-8750H is a high-performance, overclockable, six-core, 12-thread CPU clocked at 2.2GHz with a 4.1GHz boost clock. As for the GPU, Acer opted for the highest performing GPU available in a laptop, the RTX 2080 Max-Q. The RTX 2080 Max-Q is based upon the same Turing TU-104 design utilized within desktop-grade RTX 2080s, bringing raytracing and sky-high FPS to gamers on the go, and similarly to the 8750H, is overclockable.

The design of the Triton 500 is aesthetically pleasing with an aluminum chassis, a three-zone RGB backlit keyboard, customized keycaps, and a sleek, minimalistic chassis.

The Triton 500 has plenty of ports. These include one HDMI 2.0, one DisplayPort, one Thunderbolt/USB C, and three USB 3.1 Gen 1 ports. Separate headphone and microphone jacks can also be found.

Acer has opted for a larger 4-Cell Lithium 84Wh battery to keep this powerhouse running on the go. The total weight of the Predator Triton 500 is 4.63 lbs, making it quite light for such a powerful system, and much lighter than previous generation desktop replacement laptops.