Activision Blizzard (NASDAQ:ATVI) have released their earnings for the quarter ending March 31, 2019, and they’re a bit of mixed bag. The mega publisher delivered $1.825 billion in revenue and earnings per share of $0.58, which is down from the $1.965 billion in revenue earned during 2018’s first quarter, but above the company’s outlook of $1.715 billion. Activision Blizzard stock has dipped around 2 percent in after-hours trading given the unexciting Q1 results.

Overall, Acti-Blizz leadership are presenting a more upbeat front than they did last quarter, when CEO Bobby Kotick proclaimed the company had performed “below potential” (despite beating their earnings forecast) and would be refocusing on their core franchises and laying off 8 percent of their workforce. Thankfully, nobody’s losing their jobs this quarter, as Kotick is now saying he’s “pleased with [the company’s] progress.” What a difference three months make! 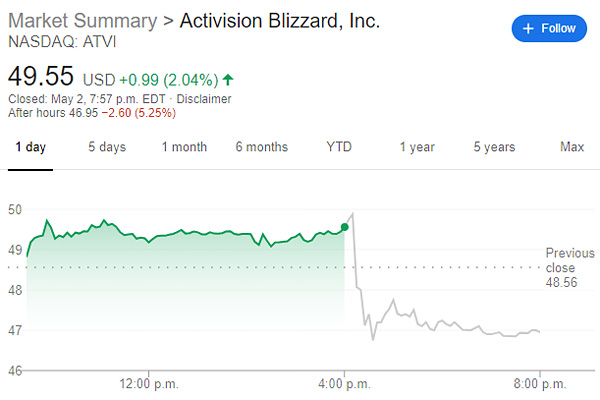 Unsurprisingly, Activision Blizzard’s biggest source of income in Q1 were “games as a service” standbys like Call of Duty, Overwatch, and Candy Crush, with the company generating $800 million worth of in-game net bookings. Call of Duty: Black Ops 4 seems to be performing particularly well for the publisher, with total hours spent with the game increasing double digits compared to Call of Duty: WWII. Acti-Blizz’s esports business is also growing, with the Call of Duty league selling its first five teams. Meanwhile, the King mobile division is more than pulling its weight, with Candy Crush Friends Saga driving up overall monthly active users for the second straight quarter.

Overwatch League aside, the Blizzard half of Activision Blizzard didn’t get much lip service in the Q1 financial report or during the earnings call. Probably because the division is still struggling to find its feet following layoffs and a refocusing of resources designed to increase input. Hopefully Blizzard can turn their fortunes around, but for now there no major new releases are coming from them in 2019, and the division’s Q1 revenue is down $140 million year-on-year.

The one pleasant surprise in Activision Blizzard’s mostly-predictable Q1 results was the success of From Software’s Sekiro: Shadows Die Twice, which sold 2 million copies in its first 10 days one sale. The sales were “better than expected,” and no doubt partly responsible for the Q1 earnings beat. According to COO Coddy Johnson, Acti-Blizz “couldn’t be more pleased” with the collaboration with From Software, raising the possibility that the publisher may team with other select developers in the future.

Related Bungie is Splitting from Activision and Taking Destiny With Them

While Q1 was far from a disaster, 2019 remains a transitional year, with the Activision Blizzard burning fumes while they wait for their next big hit. What that will be, isn’t entirely clear. This year’s Call of Duty game, strongly rumored to be Modern Warfare 4, has the potential to be big, but could the back-to-basics approach fall flat? Blizzard is rumored to be toiling away on a new Diablo, but is that series still a needle-mover in this era? Following the success of EA’s Apex Legends, can Acti-Blizz find a way to compete in the Battle Royale space? We’ll have to wait for answers to those questions, but for now, Bobby Kotick is preaching discipline and cautious investment…

Our first quarter results exceeded our prior outlook reflecting strong operating discipline. We are refocusing our resources on our biggest franchises to deliver the operational excellence for which we are known. As we outlined last quarter, we are increasing our focus and investment on our biggest franchises in order to better execute and unlock their great potential. In prioritizing our franchises and the communities of players invested in these franchises, we’re staying true to the approach that drove our Company’s long-term success, doing a few things very, very well. We’re continuing to selectively invest in new potential franchises, but our focus is innovation with improving franchises of which we have many.

Not exactly the most inspiring call to arms, but there’s a good chance it will pay off for Activision Blizzard down the line. For now, the company is looking forward to revenue of $1.315 billion in Q2 and $6.025 for the full fiscal year 2019. Hopefully more exciting lay things are ahead for those who ride this dry spell out.