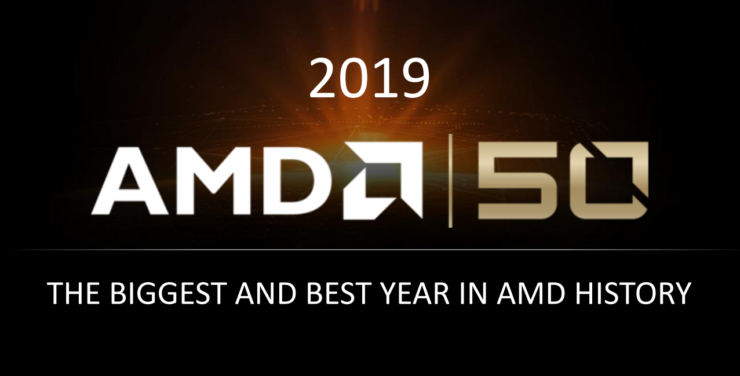 Today Advanced Micro Devices (NASDAQ:AMD) posted a solid beat on earnings and revenue for the first quarter of 2019. AMD’s highlight of the day is improved gross margins thanks to Ryzen CPU prices pushing client ASP higher, as well as EPYC and GPU datacenter products.

Head over here for the previous quarter and AMD’s year-end earnings. As of this writing, AMD shares are up 5 percent in after-hours trading. 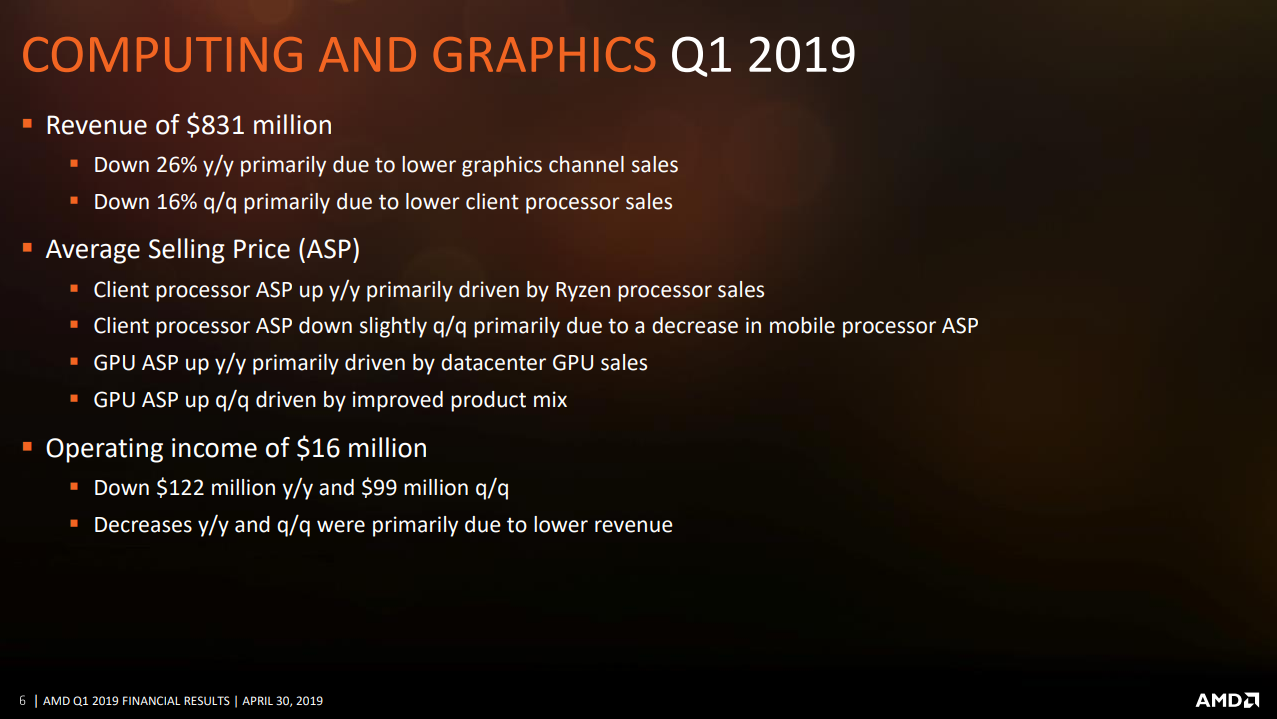 AMD’s Computing and Graphics segment posted $831 million in revenue, down from $953 million a year ago. Compared to the first quarter of 2018, the biggest difference was a large drop in the demand for its Radeon graphics processors. Cryptocurrency related demand has fallen off and further complicating matters – while there are a few bright spots in the lineup, generally, graphics competitor NVIDIA (NASDAQ:NVDA) has a faster, and more efficient lineup available to gamers.

Compared to the previous quarter, CPU sales have fallen a bit due to the expected seasonal decline always present in the first quarter for all semiconductor firms. Nothing to worry about here.

What helped this quarter was despite a lower overall volume of CPU shipments, the average selling price, or ASP, increased enough for AMD to specifically call out its Ryzen line of high-performance desktop processors as having been the primary driver for the huge increase in the company’s gross margins – which came in at 41 percent – the highest we’ve seen from the company in a very long time.

How well AMD is doing in the GPU datacenter market is a bit harder to discern. What we do know is that sales were strong enough to materially impact overall GPU ASP, which won’t be too surprising as AMD can fetch a much greater price for its FirePro and Instinct line of GPU accelerators. 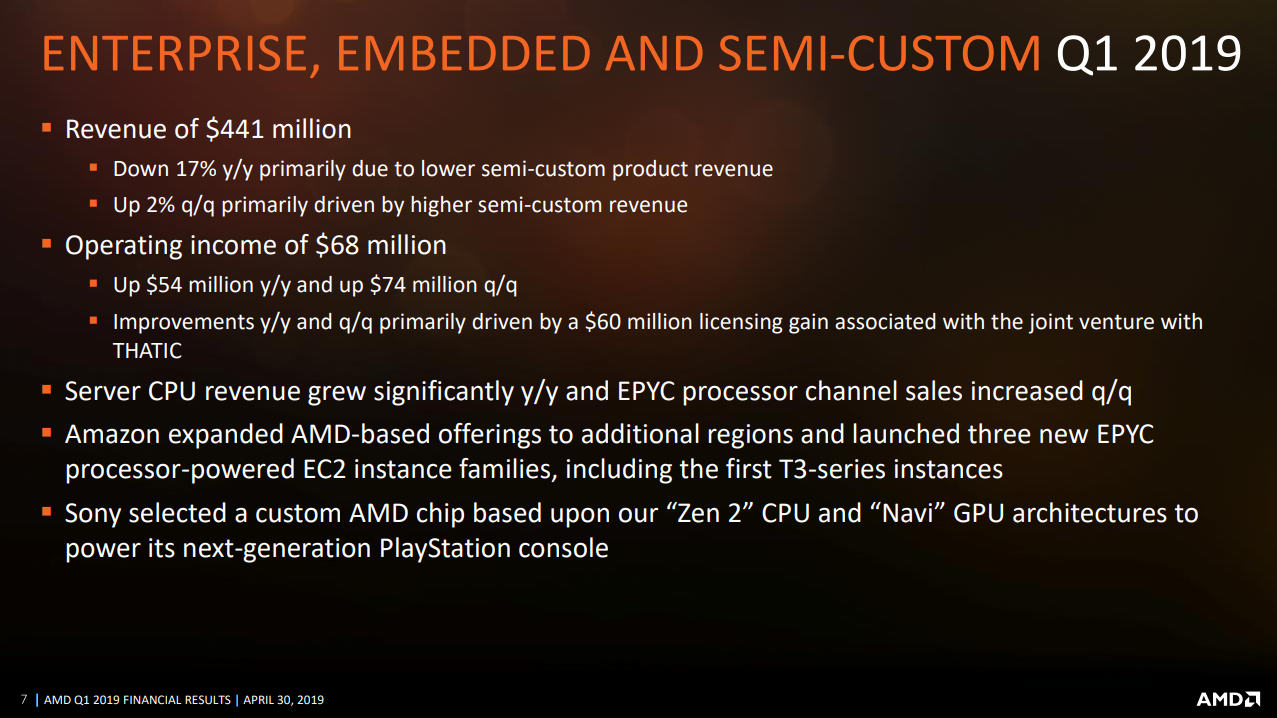 AMD’s other primary segment, Enterprise, Embedded and Semi-Custom booked $441 million for Q1, down 17 percent from $532 million during the same quarter a year ago. Some licensing agreements really came in to play here – the JV with Thatic sent $60 million to AMD coffers. Without this, the Palo Alto, CA-based company would have been almost breaking even in terms of operating income.

EPYC is listed as having its channel sales increased with revenue that “grew significantly”, however, we do not know how much server market share the firm has won yet. 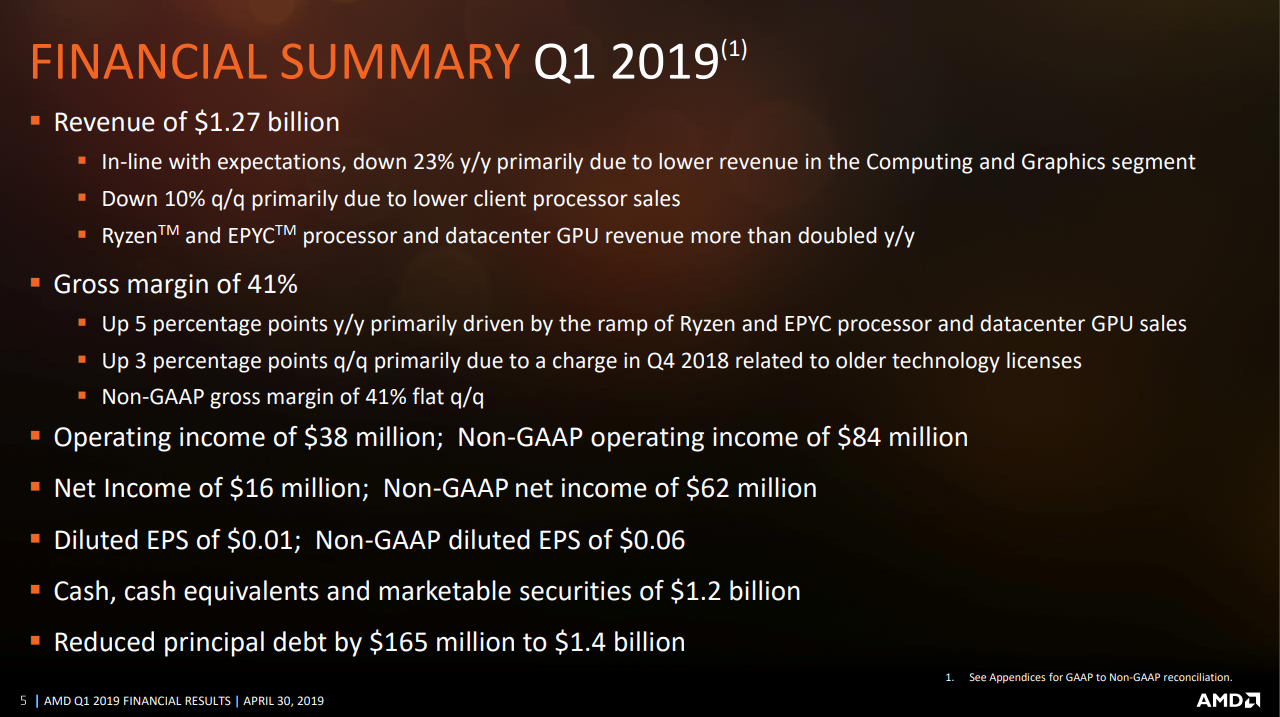 AMD’s first quarter results are a bit of a mixed bag. Revenue was down year-over-year, yet AMD is finally posting margin numbers that were called out as necessary to the firm’s long term financial health by senior management. And that’s probably the most important takeaway. AMD can simply sell Ryzen parts for much more than it could in years past with its FX and Athlon lines based on the now infamously bad Bulldozer uArch.

We are probably witnessing the transition that AMD has long envisioned for its enterprise division. The company was kept afloat during its darkest days because of EESC’s huge contracts to supply both the Microsoft (NASDAQ:MSFT) Xbox as well as the Sony Playstation their SoCs, custom APU based on Jaguar CPU cores and GCN graphics cores. Now AMD is really beginning to ramp its EPYC server processors to its partners, and it’s here that the company will be able to really drive both margins and revenue – its simply the most lucrative market it can win, and every single slice of this pie it wins it takes directly from rival Intel.

Switching to how things look moving forward, AMD has guided to $1.52 billion for the second quarter, which bucks the trend of other semiconductor firms guiding down for the year. If you take a look at our Intel earnings post from last week, you’ll read that Intel adjusted its forecast way down, and as a result, its stock price tanked. Intel shares have yet to recover any of the losses and have in fact sagged in the days since then. AMD, on the other hand, held the line on its forecast and at $1.52B for the 2Q’19, is actually a bit more than some analysts had called for.

Lisa Su has steered the chip-maker to a healthier balance sheet as well. AMD held $1.7B in debt in Q1’18, and a year later the company is down to $1.3B in debt. Cash on hand has increased from $1B to $1.2B in the same time period.

If you’ve been biding your time to see the long-awaited turnaround of AMD, then look no more. You are witnessing it happen. The next phase will bring a robust combination of its true datacenter weapon, the next generation of EPYC parts, as well as the upcoming Ryzen parts, both fabricated on TSMC’s 7nm lithography process.