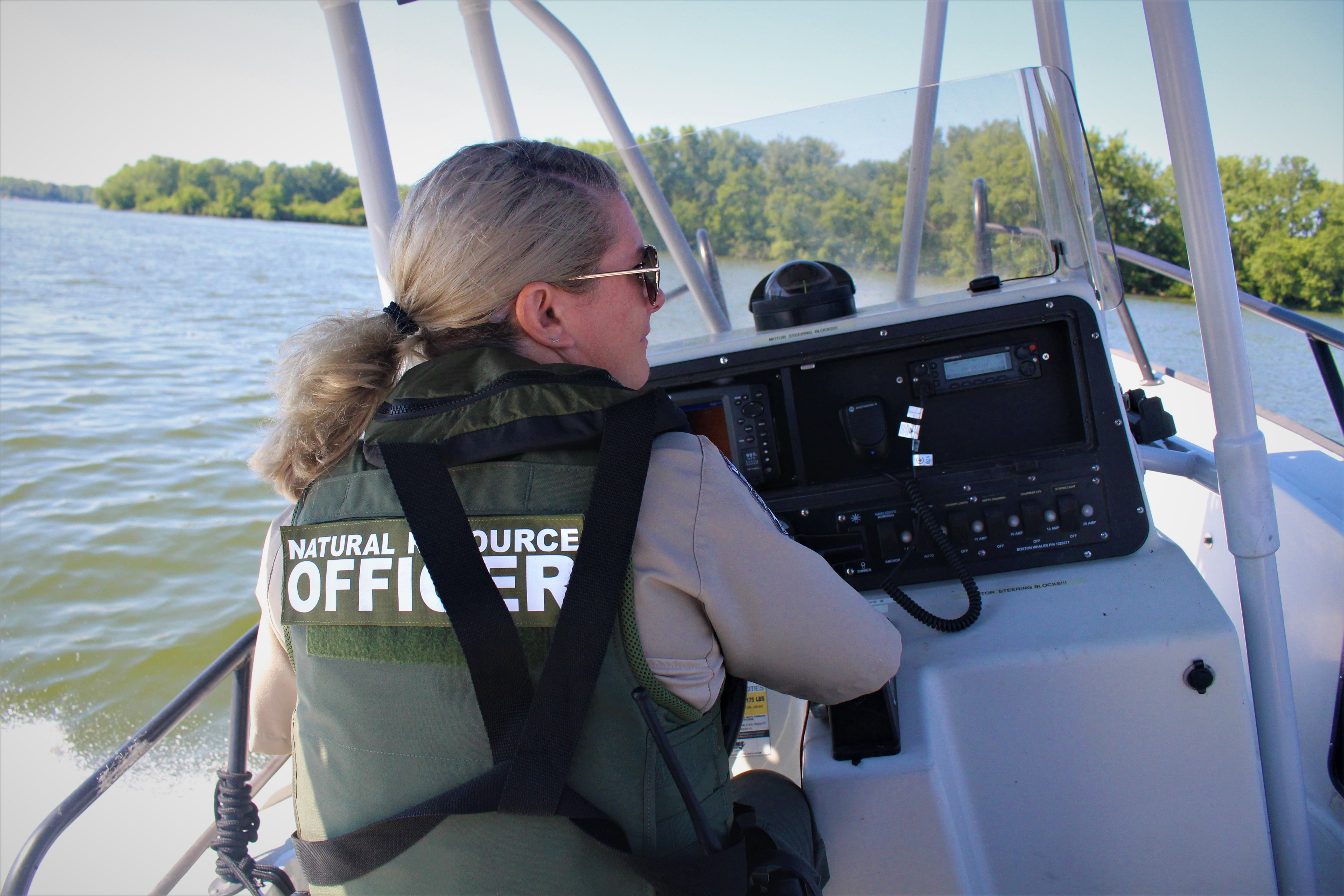 Jenn McClain Eskey is a lifelong learner and servant leader. She brings a sense of enthusiasm and a can-do attitude to everything she does, whether she is taking a walk in the woods, diving headfirst into a home improvement project, or interacting with people on the job as a natural resource officer with the Ohio Department of Natural Resources.

McClain Eskey gleans lessons from the classroom and her own experiences, including military service, parenthood, bakery owner and volunteer firefighter. Though McClain Eskey never shies away from a challenge, she had to learn the hard way not to take on more than she can handle as a college student.

McClain Eskey said she was academically dismissed during her first attempt at an Ohio University degree nearly 12 years ago. At the time her five children were small, and she was attempting to balance full-time school and work with family and military obligations.

“It was too much,” McClain Eskey said. “I overloaded myself. I learned a very valuable lesson in that I have limits. If I don’t overstretch myself, I do well.”

“I thought, I can do better and one day I’m going to be in law enforcement,” she said.

She joined the military after high school, enlisting in the Army National Guard. Five years later she completed her associate degree in corrections with a focus in juvenile delinquency at Hocking College.

After returning from a deployment in Iraq with the United States Army, McClain Eskey worked as a parking enforcement officer with the City of Athens for several years. She made a temporary departure from the world of law enforcement when she opened the Sweet Arts Bakery with her mother, who retired from a career in the kitchen at O’Bleness Memorial Hospital. McClain Eskey had a brief stint in culinary school after graduation from high school, cooked in the Army, and always enjoyed cooking and baking for others. The bakery was a lifelong dream for her and her mother. Their business was just beginning to turn a profit when COVID hit in 2020.

“It was as though my entire world exploded,” McClain Eskey said.

They shut down the bakery, not knowing what its future would be. In 2021, they made the decision not to reopen the bakery. That fall, during a long walk in the woods of the Mohican State Park, McClain Eskey had a moment of quiet revelation. As she soaked in the natural beauty of the trees and the river, she realized she would love to spend her days working outdoors.

She had a conversation with a friend who works for the Ohio Department of Natural Resources, asking him if he thought she would make a good natural resource officer. He said he could not think of a better person for the job. McClain Eskey applied, completing a long and rigorous screening process, and became a natural resource officer for the Ohio Department of Natural Resources about a year ago.

As a new officer, McClain Eskey completed Marine Patrol training, learning water survival and how to operate boats and trailers. She is stationed out of Deer Creek State Park and also patrols Madison Lake and A.W. State Parks. In the coming months she will transfer to Hocking Hills State Park.

Having the great outdoors as her office is just one of the things McClain Eskey loves about her job. She also enjoys helping people, whether she is unlocking someone’s car, towing a boat or responding to an emergency.

“There’s literally no typical day,” McClain Eskey said. “I can be outside all day. I can be on a boat one day. I can be on an ATV. I could be on a trail the next day. Out of all the law enforcement jobs, this is one of the best. It’s fun because you just never know what is going to happen.”

Of course, being a natural resource officer also has its challenges. McClain Eskey likens state park campgrounds to small cities with constantly rotating populations with varying degrees of rule-following.

McClain Eskey said several of her classes, especially the Criminology and Police in Society classes, gave her new knowledge and insights that helped her understand the history of law enforcement, where it’s going and how to be a better officer.

“I would highly recommend the Police in Society class to anyone that thinks they want to be a law enforcement officer,” McClain Eskey said.

McClain Eskey said she thinks continuing her education will make her a better officer, and since her Veterans Affairs benefits will pay for her graduate education, she has decided to continue her education after completing her undergraduate degree.

“Knowledge and continual education are necessary to be a good law enforcement officer,” McClain Eskey said.

As a future instructor, she hopes to teach about victim awareness, domestic violence issues and other human relations issues that she feels do not get enough attention in peace officer training.

McClain Eskey said she thinks people have misconceptions about what law enforcement jobs actually involve and she recommends that students interested in law enforcement careers do their research.

As someone who has worn a lot of different hats in various jobs, McClain Eskey embraces change and advises others not to be afraid to make changes.

“Don’t feel like once you get into the career, you can’t change,” she said, “I am living proof that you can be whatever you want to be, and if you’re not liking what it is you’re doing, change it up.”

McClain Eskey said her mother often urges her to slow down and take it easy, after watching her daughter serve 12 years in the military and juggle her many roles. But McClain Eskey refuses to slow down and take a break. She keeps a full schedule, balancing work, family, school and volunteer commitments. As a volunteer firefighter with the Waterloo Fire Department, she helps deal with issues ranging from fires and car accidents to gas leaks and cats stuck in trees.

“It’s just another way of me giving back,” she said. “I’ve always felt that those who can help should, and I can physically and mentally do it right now, so I should.”