Dark Devotion was a frustrating experience for me. Taking, unsurprisingly, a lot of cues from Dark Souls, it shuffles players through dank and terrible dungeons filled with nightmarish monsters. But awkward controls and difficulty understanding of what the game wants of you hampers the descent.

I don’t like to use the old adage that any remotely difficult game is in some way like Dark Souls, but this specific game is more than a little bit inspired by the famous series. Even so, with its own unique tone, narrative and feel, Dark Devotion doesn’t feel like a poor man’s clone.

Related Chocobo’s Mystery Dungeon: Every Buddy! Review – Back in the Saddle

The art style alone is immediately hypnotizing. The pixel art is expressive, while a certain uncomfortable gloom really emphasizes the darker tone of the game. It feels like the colours themselves are being oppressed which in turn makes you wary of this dark place. I normally prefer my games colourful, especially the pixel art ones, but here the dim colours serve to highlight in the game in a way that I can’t fault. The animation is also impressive, with smooth movement despite the blocky style. With dozens of weapons and items to find, the animated attacks do a good job of showcasing the weight and size of each weapon in a believably brutal fashion.

The combat, however, is not my bag. Maybe I’ve just been playing too much Sekiro recently, but I found the fights awkward and, for the most part unsatisfying. The problem is the stamina management that has become so tied to the genre feels too restrictive in Dark Devotion. In 2D, the only way of avoiding attacks is moving backward or forward, especially because Dark Devotion, for some reason, has no jump. Blocking is only ever a temporary solution, and both actions take up stamina, so the result is a constant slog where you are never able to attack because just getting close enough costs all your stamina. You can start to get the rhythm of it after a while, but it never feels as satisfying or natural as simply sidestepping incoming attacks and moving in for the kill. 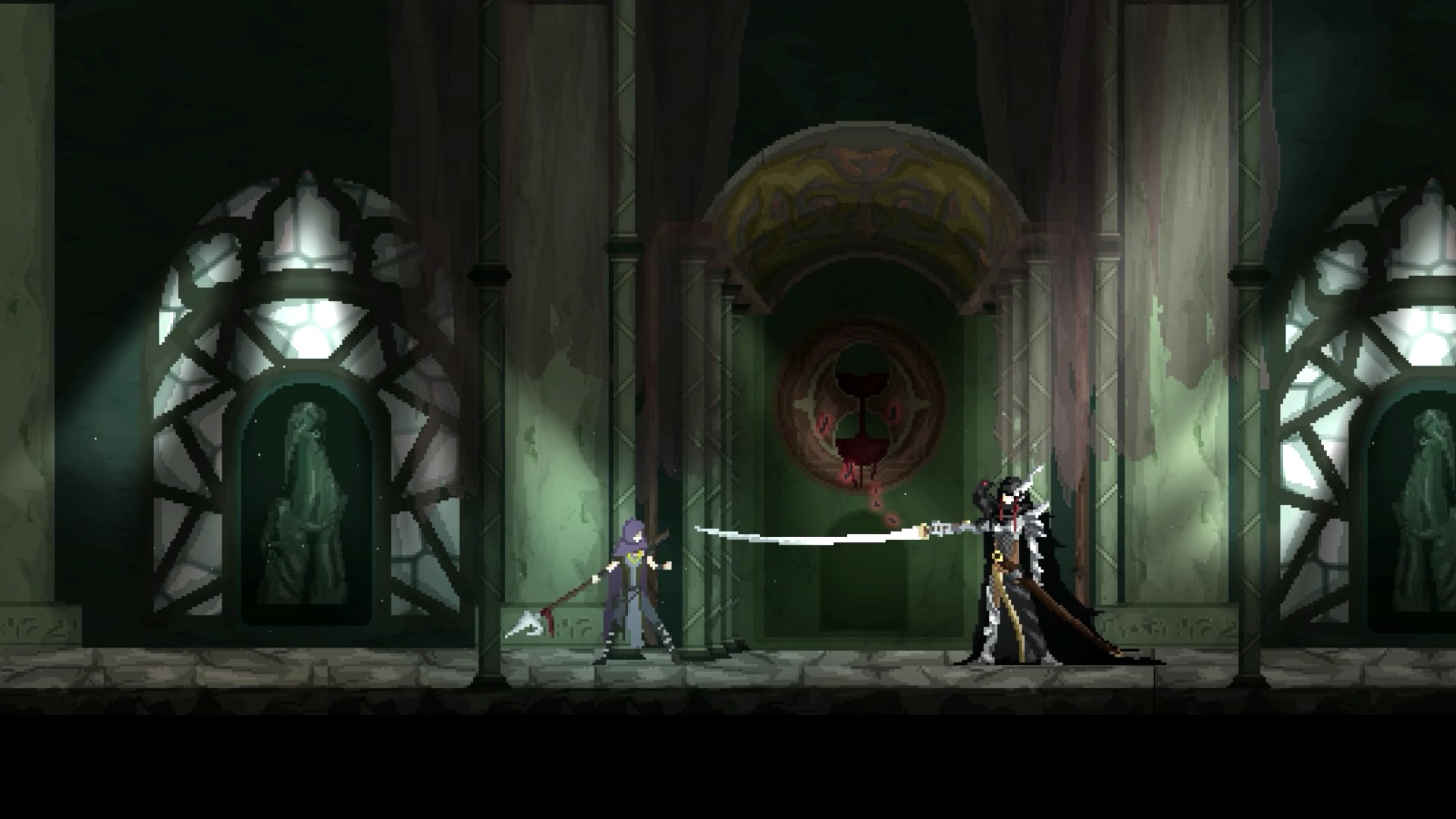 One of the biggest differences between Dark Devotion and its contemporaries is that Dark Devotion is not procedurally generated. Dungeons are filled with static corridors, ladders, doors, and traps you’ll begin to memorize with each descent into them. It gives you a sense of the area, and lets you get to know the place, but the overall darkness of the maps often make it hard to see sense of the personality. Some of the zones in this ruined temple don’t mesh well together either. An abandoned town, deep underground and under a temple just seems wrong. But remembering your route is important because the traps in this game can be a real pain. After the tutorial, which doesn’t do a great job of preparing players for how difficult the rest of the game is, players are told to explore the Abandoned Dungeon. As soon as you enter this first area, you’ll most likely be caught out by the spear trap above, and probably the spike trap below for that matter. Getting past a section filled with traps in your first attempt is normally down to luck as it can be incredibly hard to identify where it’s safe and where it isn’t. This would possibly be a fun and tense experience if death wasn’t such a boring setback.

When you die in Dark Devotion, you are sent back to the hub where NPCs and a cute black cat wander around vacantly. But before you run back into the dungeon, you’ll have to go see the smith and get your loadout reforged. It only takes a couple of seconds but it’s needless to make players run back to him every death to select the only weapon they can, especially in the early game. This delay also made me restless, which was possibly the point, so I’d run headlong into the first trap again trying to catch up to where I wanted to be quicker.

Related ToeJam and Earl: Back in the Groove Review – How Sharla Got Her Groove Back

The enemies themselves are all impressively designed. Their attacks are well telegraphed and their behaviour is simple and understandable, even if combat isn’t as functional. Each one looks unique and feels different to fight; moreover, all of them carry a certain grimness that adds to the gothic darkness of the game. Likewise bosses are all towering, almost Lovecraftian horrors that cause a knot in your stomach as you watch them lumber towards you. An early example is a giant with an arm tied to some sort of sacrificial altar. Players have to rush in, attack and escape before the bloody titan can retaliate, but in the second stage of the fight, the beast rips its tied arm off so it can chase you around the room. These encounters really highlight the issues I had with the combat because they should feel a lot more fun than they do.

Another problem highlighted by bosses is the fact that despite spending a long time with the game, I had no idea what I was doing most of the time. Your first mission, given to you by a large scribbling bug-like man in the hub, is to go and kill some grey monsters in the Abandoned Dungeon. But after finding and slaying them, after several attempts, I couldn’t find a way of returning to the hub. So I kept going. I wound up killing the boss and moving on to a completely new area before eventually dying and coming back to the hub to turn in my quest. I thought perhaps my progression would help me for the next mission, but it didn’t. The next mission was in a new, unconnected area to where I explored, and I had to kill lantern carrying enemies this time. Unfortunately, I didn’t find all of them as I explored this area, but did encounter, and slay, the boss. Once again I had progressed to a new area, although I still hadn’t completed my mission. I love exploring in games, but with the chance to backtrack, Dark Devotion made it all too easy to get ahead of yourself and make it feel like wasted time instead.

I wanted to like Dark Devotion. From the first trailer I thought this looked like my kind of game, but the slow, often frustrating combat and indecipherable missions and maps left me feeling annoyed, restless, and constantly thinking of something I would rather be playing.

Reviewed on PC (code provided by the publisher). You can purchase the game via Green Man Gaming.

Dark Devotion looks good and clearly has a lot of imagination behind it, but the systems that keep repeating throughout the game don’t do much except getting you lost, confused, or frustrated.