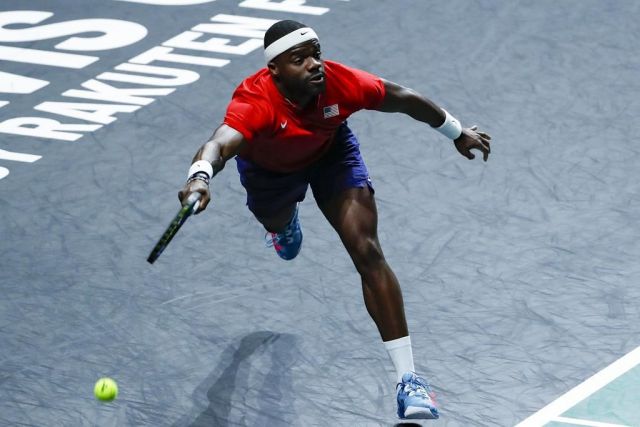 MÁLAGA, Spain (AP) — Taylor Fritz pulled the United States level with Italy at 1-1 in the Davis Cup quarterfinals on Thursday after Frances Tiafoe lost his singles. The tie will be decided in doubles.

Fritz hit 12 aces and converted one break to better the No. 23-ranked Musetti for a second time after beating him at Wimbledon in June.

Sonego, ranked No. 45, struck 17 aces and never ceded a service game to Tiafoe. Sonego clinched the win after Tiafoe netted a forehand following a long rally to end the second-set tiebreaker.

“I feel like I let my guys down,” Tiafoe said. “It’s tough. It has been a great season for me and I wanted to win for my team, so (I feel) some extra frustration because it is not about me, it is about the team.”

No. 19-ranked Tiafoe, who reached the U.S. Open semifinals in September, won their only previous meeting at the Paris Masters just over three weeks ago.

“A couple of weeks ago I was playing very aggressive, running him around, hitting much harder; today he was,” Tiafoe added.

Sonego saved two set points while serving 6-5 down in the second set to force the tiebreaker. He said he drew on the loud Italian fans who showed up to support him in Spain, which is home to more than 250,00 Italians.

“It was an amazing atmosphere,” Sonego said. “We are in Málaga, not too far (from home). I really enjoyed every moment on the court with the crowd.”

Italy is playing without its top two players as Jannik Sinner heals an injured finger and Matteo Berrettini recovers from a hurt foot.

The U.S. holds a record 32 Davis Cup trophies, but its last one came in 2007 under the previous format of ties being held at host countries instead of the revamped event where the final eight teams gather in one spot for a week of tennis.

On Wednesday, a Croatia led by Marin Cilic advanced after beating a Spain side that was missing Rafael Nadal and No. 1-ranked Carlos Alcaraz.

Croatia will face Australia in the semifinals after it beat the Netherlands on Tuesday.

The final is on Sunday.