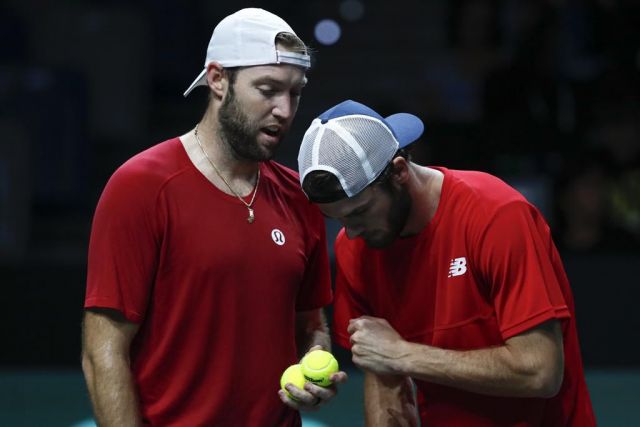 MÁLAGA, Spain (AP) — Italy beat the United States in a doubles decider Thursday to advance to the Davis Cup semifinals for the first time in eight years.

Simone Bolelli and Fabio Fognini defeated Tommy Paul and Jack Sock 6-4, 6-4 to secure a 2-1 win for Italy after the teams split the singles matches.

Bolelli and Fognini broke once in each set to set up a semifinal on Saturday against Canada, which beat Germany 2-1.

The U.S. holds a record 32 Davis Cup trophies, but its last one came in 2007 under the previous format of best-of-five matches played in host countries instead of the revamped event where the final eight teams gather in one spot for a week of tennis. The American team led by captain Mardy Fish team came to Spain with high hopes that it could break that dry spell.

“I have wanted to win this thing for a very long time as a player and captain,” Fish said. “It is not going to happen this year and it stinks. We are going home without the trophy, which is a bummer.”

Italy, whose only Davis Cup title came in 1976, won without its top two players as Jannik Sinner has an injured finger and Matteo Berrettini is recovering from a foot problem.

Sonego, ranked No. 45, struck 17 aces and never ceded a service game to Tiafoe. Sonego clinched the win after Tiafoe netted a forehand following a long rally to end the second-set tiebreaker.

No. 19-ranked Tiafoe, who reached the U.S. Open semifinals in September, won their only previous meeting at the Paris Masters just over three weeks ago.

“A couple of weeks ago I was playing very aggressive, running him around, hitting much harder. Today, he was,” Tiafoe said.

Sonego saved two set points while serving at 6-5 in the second set to force the tiebreaker. He said he drew on the loud Italian fans who showed up to support him in Spain, which is home to more than 250,000 Italians.

“I am really proud of my team and of this unbelievable crowd, it looks like we are in Italy. They support us from the beginning,” said Italy captain Filippo Volandri.

Fritz hit 12 aces and had one break to beat the No. 23-ranked Musetti for a second time after defeating him at Wimbledon in June.

Canada’s Denis Shapovalov rebounded from losing his opening singles match to help clinch the winning point in doubles against Germany.

Shapovalov then teamed up with Vasek Pospisil to beat Kevin Krawietz and Tim Puetz 2-6, 6-3, 6-3.

On Wednesday, a Croatia team led by Marin Cilic advanced to the other semifinal after beating a Spain side that was missing Rafael Nadal and No. 1-ranked Carlos Alcaraz.

Croatia will face Australia in the other semifinal on Friday.

The final is on Sunday.