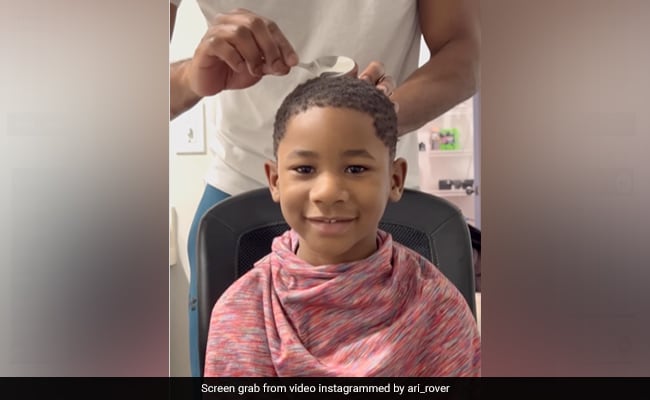 The video has accumulated millions of views and likes.

A man in the United States has gone viral on social media for giving his son a haircut using just a kitchen spoon. Taking to Instagram, user ari_rover shared the video in which he was seen trimming his child’s hair in a very unique. “I cut my boy’s hair with a spoon. Since we are all doing magics on haircuts now,” the father wrote in the caption of his post.

The video opened to show the little boy sitting in front of a camera. Seconds later, the father is seen cutting his son’s locks off with the edge of a kitchen spoon. Even though it seemed unreal, the man captured the whole process in a time-lapse video. The father even slowed down bits of the process and showed off the final outcome.

Watch the video below:

The Instagram user shared the video a few days back and since then his post has accumulated millions of views and likes. In the comment section, while several users praised the father for his amazing skills, others wondered if the spoon was sharp or if there was another trick to this that they were unable to grasp.

“This is talent,” wrote one user. “I don’t know how you did this but it’s magical! Nice cut,” said another.

A third user commented, “Wowooo no need w buy a barbing machine again. All save and cost free,” while a fourth added, “After watching this for the 432 million times, Amazing talent!” “You’ve definitely got gifted hands!” said another user.

Meanwhile, previously, another resourceful father had gone viral online for converting his daughter’s wall scribbles into a Mickey Mouse painting. The video was shared by Figen on Twitter. The father used spray paint and stencil to transform his daughter’s wall art into a full-fledged masterpiece.

The video accumulated more than six million views and nearly 90,000 likes. Internet users praised the father for his amazing talent.