The Intel Core i5-11400 6 Core Rocket Lake Desktop CPU has leaked out along with its benchmarks. The mainstream chip will be part of the 11th Gen Core family and will be replacing the Intel Core i5-10400 which offers fantastic value given its price but lacks any overclocking capabilities.

The Intel Core i5-11400 is part of the Core i5 segment within the 11th Gen Rocket Lake CPU family. It features 6 cores and 12 threads that are based on the 14nm Cypress Cove architecture & is going to deliver improved IPC over the aging Skylake architecture.

The performance benchmarks were carried out on an MSI Z490M Gaming Edge WiFi motherboard which was equipped with 64 GB of DDR4 memory. The speeds for the DDR4 DIMMs have not been reported. In single-core tests within the Geekbench 5 benchmark, the Intel Core i5-11400 Desktop CPU scored 1247 points and in the multi-core tests, the chip scored 6197 points. The single-core performance shows a jump of 12% while the multi-core performance is boosted by 9%. This is a respectable gain over its 10th gen predecessor. 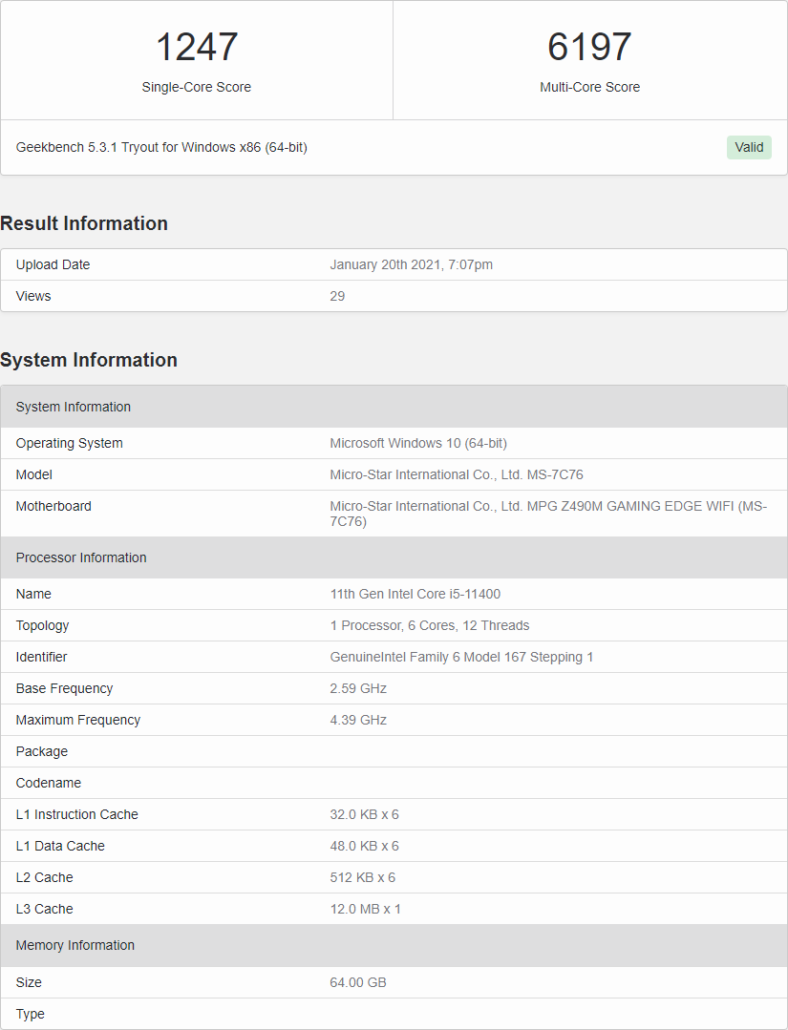 Compared to the Intel Core i5-10600K which offers a much higher base and a boost clock of 4.1 GHz / 4.8 GHz, the Core i5-11400 ends up slightly slower with 6% lower single-core and 14% lower multi-core performance but that is to be expected since the Core i5-10600K is an unlocked part with a 125W (PL1) and 225W (PL2) rating and also carries the aforementioned higher clocks. At the same time, the Core i5-11400 is no match for the Ryzen 5 5600X but in either single-core and multi-core performance tests. The actual competitor to the Ryzen 5 5600X should be the Core i5-11600K but based on these benchmarks, even the unlocked part will have a hard time matching the Ryzen CPU.

As we reported, the Intel Rocket Lake Desktop CPUs will be shipping months after the 500-series boards that will be available on 11th January. The CPUs are expected to be announced at CES 2021 but a hard launch isn’t planned till March-April.