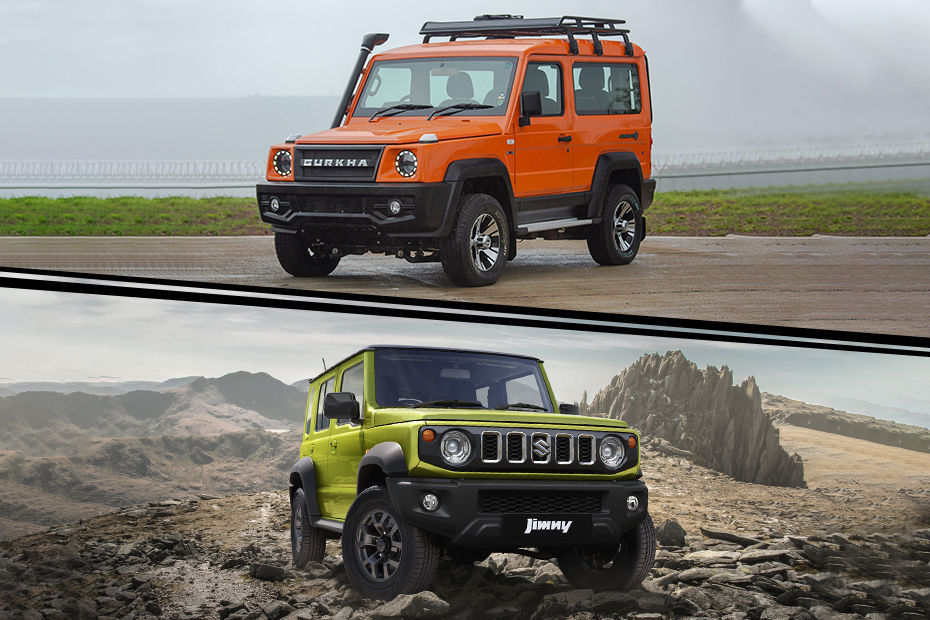 With the debut and imminent arrival of the Maruti Jimny, India has gained another off-roader for the masses. It stands next to two established giants of the segment: Mahindra Thar and Force Gurkha. While we have already compared the Maruti SUV to the former, it’s time we see how it sizes up side by side with the even more hardcore Force SUV.

The Maruti Jimny is clearly smaller than the Gurkha in comparison. It is smaller lengthwise by 131mm, narrower by 167mm and shorter by a whopping 355mm. The Jimny does have a longer wheelbase to accommodate the two extra doors.

Both the Jimny and Gurkha have similar styling, but the Maruti has a more modern look. They both have square-ish front ends with round headlamps and fog lamps housed in the rugged bumper design. The Gurkha looks more muscular than the Jimny, especially with the air dam, skid plate and bonnet design.

The first difference you would notice while comparing the duo is the extra set of doors on the Jimny, while the Gurkha is offered in a three-door avatar. Both off-roaders have flat side profiles and squared wheel arches, but while the Maruti off-roader looks slick, the Force looks chunkier. The Gurkha has alpine-style rear windows while the ones in the Jimny have a two-part look while being functional.

The Jimny has the option of 15-inch alloy wheels while the Gurkha only comes with 16-inch steel wheels, but alloy wheels are part of the official accessories.

The height difference between the Jimny and Gurkha is most apparent when the two SUVs are seen from the rear. Both have a spare wheel mounted to the side-hinged tailgate, but the styling is very different. While the tailgate of the Jimny is nearly the entire rear end, the wider Gurkha has an opening in the centre with plenty of metal on either side. The Jimny’s tail lamps are housed in the rear bumper while Gurkha’s tail lamps are placed on the body. The kitted-out Gurkha also comes with a ladder on its left side which leads to a roof rack.

The interior of both SUVs are a good mix of rugged simplicity and a splash of modernity with the cabin comforts and infotainment. They both have a black cabin theme with an upright dashboard design. Jimny offers a nine-inch touchscreen infotainment display in its top trim while the Gurkha has a seven-inch unit that looks more like an aftermarket fitment rather than a factory-fitted unit.

The Maruti’s climate control console is certainly more modern with the digital readout in the middle.

The rear seats are different here. The Jimny offers traditional split-folding bench seats in the back while Gurkha has captain seats for the rear seat passengers.

The Jimny has a more practical boot space too than the Gurkha.

We know that the five-door version of the Gurkha is in the works and can be launched sometime this year. However, the elongated Gurkha will be significantly longer than the five-door Jimny, placing the two in different categories. It will be a closer rival to the five-door Mahindra Thar which is also expected to debut later this year