The Nursing and Midwifery Council has today approved changes to its pre-registration education programme standards which it said would help widen participation in nursing.

The changes include doubling the number of hours nursing students can have for simulated practice learning, and greater flexibility around entry requirements to get onto a nursing and midwifery programme.

They come as a result of the UK leaving the European Union (EU), meaning the NMC is no longer bound to follow EU regulations.

During a meeting today, Sue West, senior nursing education advisor at the NMC, told council that the new changes removed “outdated and unnecessary requirements” from the education programme standards.

She said: “The proposals themselves, they will help widen access to nursing and midwifery programmes by removing unnecessary barriers to admissions and allowing education institutions to set their own selection of admission criteria.”

The decision follows a 10-week public consultation on the proposed changes which took place between 13 July and 21 September 2022.

The first new change will see education institutions have more flexibility to set their own robust entry requirements, which includes removing the need for at least 12 years’ general education before starting a nursing or midwifery programme.

Official council papers said that respondents to the consultation “found the concept of ‘general education’ arbitrary” and that the term could mean different things in different locations.

Removing this requirement aims to widen participation in nursing and midwifery courses and enable inclusivity for communities such as refugees and those from travelling communities.

The new standards will also allow for increased flexibility for nursing courses around the use of simulated practice learning.

Education institutions will now be able to run simulation for 600 of the 2,300 practice learning hours that students need to complete. This is double the amount that was allowed before.

During the meeting, council member Lynne Wigens said she fully supported the move to increase the hours of simulated practice, but warned that there was “an inequity around simulation practice resources” within education institutions across the UK.

Ms Wigens noted that the NMC should begin to look at the availability of simulation resources across universities and other institutions, “to scope the preparedness of areas to have further increases in simulation”.

Finally, the new changes would also see the removal of EU requirements about the settings in which nursing and midwifery practice placements must take place.

The regulator said this would allow students to complete their practice learning in the settings most relevant to them.

Council members identified that there were differences across the four devolved nations in how the changes were received.

Hugh Bayley, NMC council member, noted that countries such as Northern Ireland and Scotland appeared less likely to agree with the changes, because the “majorities in the [EU] referendum voted against the UK leaving the EU”.

The council papers stated that it would be possible for government and education commissioning bodies in each of the four countries to require universities to remain fully aligned to the EU directive standards, should they choose to do so.

Andrea Sutcliffe, NMC chief executive and registrar, said: “It’s essential that nursing and midwifery education is accessible to the broadest possible range of students and prepares them to meet people’s changing and increasingly complex needs.

“That’s why we’ve drawn on evidence and best practice to propose changes that will widen access to courses and give students the best possible education that enables them to provide excellent care to people.” 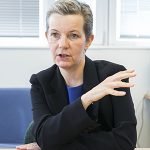 The NMC agreed during the meeting that it intended to undertake further work around nursing programme standards, particularly around the number of practice learning hours.

Although there has been support to move forward in setting a reduced minimum number of practice learning hours, it said that it had not consulted on such a significant change.

In its recent council papers, the NMC said: “We need to explore the impact of such a change… and consider ways to mitigate any risks in reducing the minimum practice learning hours.

“Executive board with support from council have agreed to an additional phase of this work to explore this option further.”

Ms Sutcliffe added: “We’ll keep students, educators, and our stakeholders updated about these changes and any further work as we move forward and explore even more flexible options.”

The regulator also announced during the meeting that changes to its English language requirements will begin to be implemented at the beginning of February 2023, and will be fully in force by the summer.