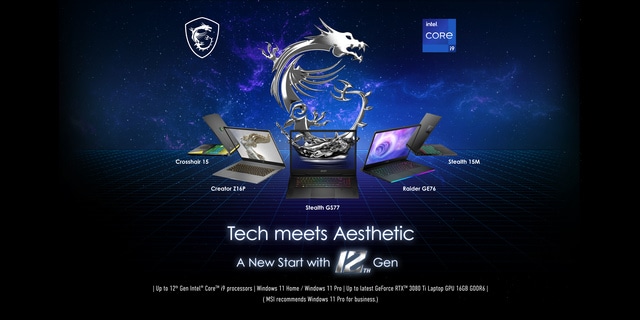 We’ve reached that point of maturity with laptop design where you no longer need to choose between a gaming laptop or a productivity laptop. You can now buy hybrid designs that embody the best of both worlds, offering understated elegance in a slim form factor as well as unrestricted performance for gaming. The devices that best embody these ideals are MSI’s Stealth GS line of laptops. For the creatively inclined, MSI also has a dedicated line of ‘Creator’ laptops.

Let’s start with the Stealth GS line. These are capable gaming laptops of course, but they’re packing powerful hardware in a relatively thin chassis. Most of the models in this line are finished in black – for a stealthier look – allowing them to blend in nicely in an office or college environment. In addition, they all include SteelSeries Keyboards with per-key RGB lighting, and support hi-res audio playback, 8K 60 Hz displays, Wi-Fi 6E, and more.

Here’s what we’d recommend you buy from MSI’s extensive line-up:

If you’re looking for the best-of-the-best, look no further than the Stealth GS77. Powered by 12th Gen CPUs and Nvidia’s latest GeForce RTX 30-series GPUs, this line offers no-holds-barred performance in a relatively thin, 17” chassis. Coupled with that exceptional hardware is fast DDR5 RAM and NVMe SSDs, not to mention a superb array of displays to choose from. Depending on what you’re playing, you can opt for anything from an FHD 360 Hz panel all the way up to a 4K 120 Hz one.

MSI’s CoolerBoost 5 tech, which boasts of two fans with 0.1 mm blades and six heatpipes, keeps all that hot tech running cool. With a 99.9 WHr battery, and if you’re not gaming, this powerful device will easily get you through a day of work or college without having you run for the nearest power outlet.

This is a premium device meant not just for gamers with deep pockets, but for someone who really appreciates good design and is willing to pay that premium for no-compromise performance. The large screen also makes it a great device for people who work in 3D modelling, architecture, and similar fields.

If the 2.8 kg weight of the GS77 is worrying, you might want to look at the Stealth GS66. It’s basically packing the same hardware and performance, but in a smaller and lighter 15.6” chassis that weighs a mere 2.1 kg.

You get support for the same 12th Gen CPUs, RTX 30-series GPUs, DDR5 RAM, etc., but now you get the CoolerBoost Trinity+ cooling system featuring 3 fans and 7 heatpipes. The additional fans and heatpipes allow this slimmer chassis to perform just as well as the larger GS77, going so far as to allowing the GPU to boost to 105 W TGP when possible.

Given its size and features, we’d classify the GS66 as a premium all-rounder that’s great as an everyday carry for a gamer with deep pockets.

For the best value, get the MSI Stealth GS76. As with the other devices in the GS line, it shares most of the important features of the GS77, including RTX 30-series GPUs, the same display options, high-speed storage, and the monster 99.9 WHr battery that promises nearly 11 hrs of runtime.

You get the CoolerBoost Trinity+ cooling system instead of CoolerBoost 5 (with3 fans and 6 heatpipes), and since the GS76 is only available with 11th Gen CPUs, you get DDR4 RAM.

For most users, the GS76 is perfect. 11th Gen CPUs may seem to be a generation behind on paper, but they’re still some of the most powerful CPUs you can buy today. More importantly, they will have little to no impact on gaming performance, especially at higher resolutions.

For the more creative minded among you, MSI’s dedicated ‘Creator’ series line-up offers slimmer, more elegant, and more powerful designs with hardware that is tuned for content creation.

With a price tag of Rs 4,70,990, this reddot design and CES Innovation award winner isn’t for the faint of heart. As expected from the price tag, you’re getting the very best not just in hardware, but innovation as well.

Powering this beast of a machine is a 12th Gen Intel Core i9-12900H and an RTX 3080 Ti with 8 GB of VRAM, not to mention 64 GB of DDR5 RAM and 2 TB of NVMe storage. With AI accelerators and support for RT cores in apps like Premiere Pro and After Effects, you’re getting desktop-class performance in a slim and light laptop that’s a mere 19 mm thick and weighs 2.49 kg. You can edit 8K HDR video, work with massive 3D objects, and even render entire ray-traced scenes in mere seconds!

And it’s not just that. The trackpad is 50% larger than normal, that 17” QHD display is the world’s first 17” pen touch display, it supports 100% DCI-P3 for colours, is calman certified for colour accuracy, and comes in a productivity-centric 16:10 aspect ratio.

The 90 WHr battery ensures hours of power, and the CoolerBoost Trinity+ cooling system ensures that performance remains high and constant.

The price may be high, but as a creator, you’re also getting a lot of laptop for that price.

To ensure similar levels of performance to the larger, roomier Z17, MSI’s Z16P opts for a powerful and efficient vapour chamber cooling system promises excellent thermal performance, allowing the CPU and GPU to boost to nearly the same levels that they do in the larger Z17 model.

You do lose out on the Z17’s 6-speaker array and massive display, but the drop in price and weight more than make up for that. The Z16P is for top creators who want pen support, portability, and can’t afford to compromise on the performance front. Oh, and this laptop is also a Reddot Award winner.

If you need something even slimmer and lighter, and don’t have need bleeding-edge performance, the regular Z16 is the model we’d recommend for the average content creator.

The lower VRAM will affect larger 3D rendering workloads and will limit the resolutions you can game at compared to what you’d get with the Z17 and Z16P. That said, you’re still getting RTX cores and Nvidia Broadcast support, not to mention powerful video encode/decode features for streaming, rendering, video editing, and content creation.

We’d recommend the model with the 12th Gen CPU owing to higher multi-core performance — up to 45% faster than 11th Gen — better battery life thanks to more efficient E-cores in the CPU, and more GPU headroom for extracting that extra bit of performance.

Opt for the cheaper 11th Gen model if you don’t need extreme multi-core performance and want to save on some cash. Performance is just as good for most use-cases, and the money you save can go towards additional accessories and storage, depending on your needs.

So… which laptop are you picking up this year?