The PlayStation 5 has finally been revealed, but very little is known about the specs. The devkit is also in the hands of select developers, and it seems like the console is going to be extremely powerful if recent leaks can be believed.

Benji-Sales, who has proven to be a reliable insider, recently tweeted that the PlayStation 5 devkit is running a nearly 13TF GPU. He has since deleted the tweet, but a screenshot of it has been captured, which you can find below. 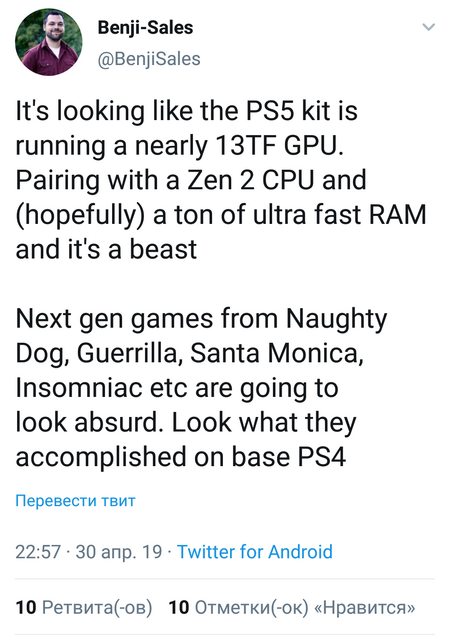 Last month, Sony made it clear that the PlayStation 5 will not be released within the next 12 month, which hints at a late 2020 release. The console will be powered by a CPU based on the third generation of AMD’s Ryzen line and by a GPU that will support ray tracing.

The CPU is based on the third generation of AMD’s Ryzen line and contains eight cores of the company’s new 7nm Zen 2 microarchitecture. The GPU, a custom variant of Radeon’s Navi family, will support ray tracing, a technique that models the travel of light to simulate complex interactions in 3D environments.

The PlayStation 5 is currently in the works, and it will be released on a yet to be confirmed release date worldwide.