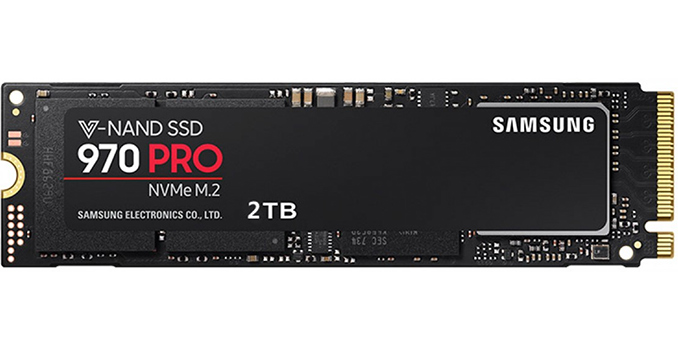 Samsung 970 Pro series 2TB models have started being listed on online retailers prior to their official release. One of the highest performing drives on the market – and one of the only remaining MLC drives – a larger 970 Pro will give high-performance users such as content creators another option for high-capacity SSDs, eliminating the need to sacrifice performance for capacity which was the case before the listing of this product.

When Samsung introduced its 970 Pro and 970 Evo SSDs last year, it got itself into a paradox situation. On one hand, the flagship 970 Pro drives offered superior performance and better endurance because it was based on 3D MLC memory, but it only went to 1 TB. On the other hand, its slightly slower 3D TLC-powered 970 Evo SSDs was available in capacities up to 2 TB. As a result, while performance-wise the 970 Pro was the king, but you had to sacrifice some capacity to get the best performance. This wasn’t what people wanted because they did not want to sacrifice capacity for speed.

As it appears, Samsung is finally releasing a 2 TB version of the 970 Pro that will increase capacity but have the same as the 1 TB version of the 970 Pro performance. The Samsung 970 Pro 2 TB (MZ-V7P2T0BW) drive will use Samsung’s Phoenix controller. I am not expecting the performance will be much different (for reference, the 1TB model is up to 3500/2700 MB/s for sequential reads/writes without SLC caching). Any performance gains would be marginal as the same technology was implemented, but only the capacity of the drive changed. Otherwise, while the 970 Pro is a going to be a 3D MLC-based SSD, it remains to be seen whether Samsung is using the same-generation 64L NAND as on the original models, or if they’re going to switch over to 96L NAND for this drive.

At present, Compuram, a retailer from Germany, and Nixiang, a retailer from China, both list the new drive. The listing even shows its ‘official’ picture. Meanwhile, a salesperson from Compuram confirmed that the company has part numbers and a datasheet listing specifications of the Samsung 970 Pro 2 TB drive. However, he could not say when the device is set to become available and how much it is expected to cost.

I assume that he would not say because Samsung has a policy about not commenting on unreleased products which would most likely also apply to the retailer. Nixiang lists the SSD for ¥8888 ($1,320), which means that the price of the drive in the US would be around $1,200.

Like many other companies, Samsung does not comment on unreleased products, so we could not verify any of the information.