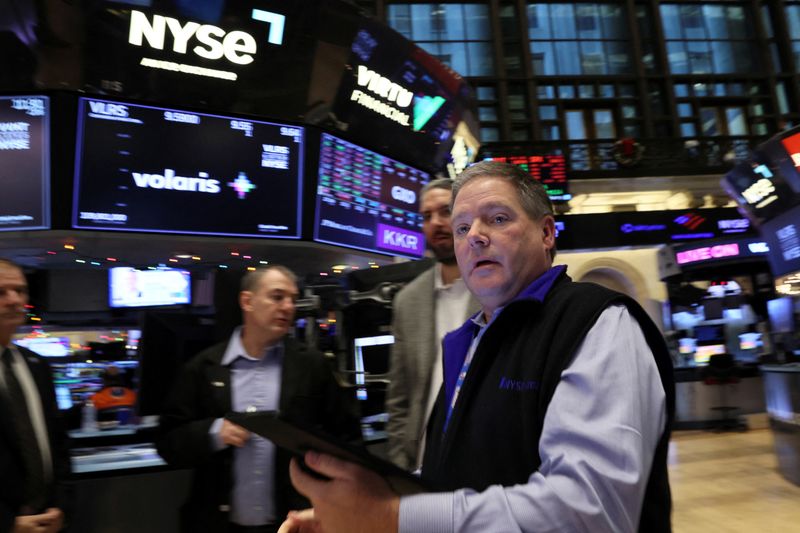 “(Chips are) a group that’s been depressed, so I’m not too surprised,” said Peter Tuz, president of Chase Investment Counsel in Charlottesville, Virginia. “We’re going to see earnings from these companies over the next couple of weeks and that will be where the rubber meets the road.”

“It’s a group that was ripe for a rebound.”

The session marks a calm before the storm in a week jam-packed with high profile earnings reports and back-end loaded with crucial economic data.

Investors are all but certain the Federal Reserve will implement a bite-sized interest rate hike next week even as the U.S. central bank remains committed to taming the hottest inflationary cycle in decades.

“(Investors) are pretty comfortable that they’re going to see lower rate hikes from the Fed, that we are rounding the corner on inflation and interest rate hikes,” Tuz added. “Stocks can do well in that environment, especially the big growth stocks that drive the market.”

Financial markets have priced in a 99.9% likelihood of a 25 basis point hike to the Fed funds target rate at the conclusion of its two-day monetary policy meeting next Wednesday, according to CME’s FedWatch tool.

Of the 11 major S&P 500 sectors, all but energy ended green, with tech shares enjoying the largest percentage gain, up 2.3% on the session.

The fourth-quarter reporting season has shifted into overdrive, with 57 of the companies in the S&P 500 having posted results. Of those, 63% have delivered better-than-expected earnings, according to Refinitiv.

Analysts now see S&P 500 fourth-quarter earnings, on aggregate, dropping 3% year-on-year, nearly twice as steep as the 1.6% annual drop seen at the beginning of the year, per Refinitiv.

The Philadelphia SE semiconductor index jumped 5.0%, its biggest one-day gain since Nov. 30 after Barclays (LON:) upgraded the sector to “overweight” from “equal weight.”

Tesla surged 7.7% after Chief Executive Elon Musk took the stand in his fraud trial related to a tweet saying he had backing to take the electric automaker private.

On the economic front, the U.S. Commerce Department is expected to unveil its initial “advance” take on fourth-quarter GDP on Thursday, which analysts expect to land at 2.5%.

On Friday, the wide-ranging personal consumption expenditures (PCE) report is due to shed light on consumer spending, income growth, and crucially, inflation.

Advancing issues outnumbered declining ones on the NYSE by a 2.77-to-1 ratio; on Nasdaq, a 1.73-to-1 ratio favored advancers.

Volume on U.S. exchanges was 11.99 billion shares, compared with the 10.62 billion average over the last 20 trading days.