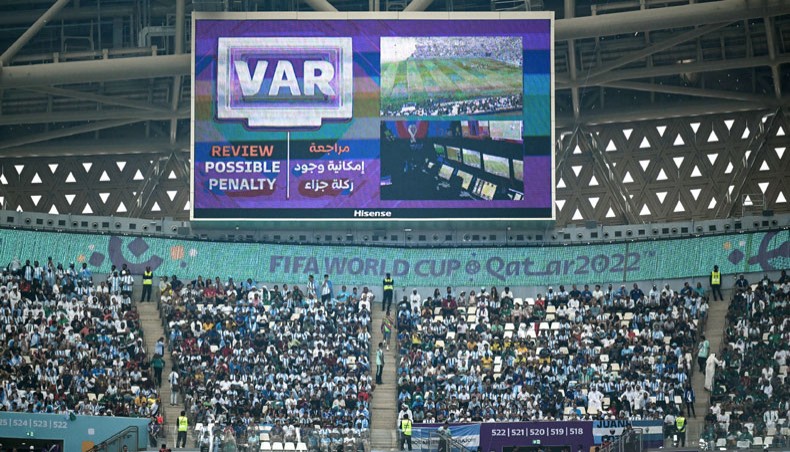 A giant screen shows a VAR monitor during the Qatar 2022 World Cup Group C football match between Argentina and Saudi Arabia at the Lusail Stadium in Lusail, north of Doha on November 22. — Agence France-Presse/Kirill Kudryavtsev

The whole world is now trembling with World Cup fever. In this age of information technology, when the whole world is under the control of technology, it is natural that there will be surprises from new technology in organising the World Cup. Therefore, Qatar World Cup-2022 is appearing with eye-catching arrangements and state-of-the-art technology. Technologies have been added that the world has never seen before. Mobile apps, sensors and technology have been incorporated to track players’ athletic and personal performance, mental health, and critical decisions quickly and accurately. The players are under a lot of mental stress due to the excitement of the game. Therefore, the app ‘Calm’ has been added for the mental health services of the players and football community. These apps will also be active during the Women’s World Cup and the Nations Cup next year. Footballers, coaches, training staff participating in both men’s and women’s World Cups can use this app for free.

‘FIFA Players App’ has been added to know the performance as soon as possible after the match, which was jointly developed by FIFA and FIFAPro. Every player will have access to their personal performance data after every match. The apps will have a combined repository of amazing analytics, data and tracking data from FIFA’s highly educated coaches on game and player performance. In-traffic cameras around the stadium will also collect data on players on the field. The speed and distance travelled by a footballer, the number of actions exceeding 25 kilometres per hour, the highest speed positional hits, and so on will be immediately visible to players and spectators on a map and in a visual format. These insights will be analysed and fed into algorithms and models. This section of the app is called ‘Football Data Metrics’.

There is no end to the debate about offside in this popular sport. Apart from the referee, offside can now be easily caught by the video assistant referee, or VAR. However, many questions are raised about its efficiency. New ‘semi-automated offside’ technology is being used at the World Cup in Qatar to ensure accuracy. With the help of advanced VAR, offside decisions can be made in just 25 seconds, which previously took 70 seconds. To implement the technology, a sensor in the centre of the ball is used, which sends data 500 times per second and can determine the perfect kick point. There are 1,200 synchronised multi-tracking cameras installed on the roof of the stadium to monitor the stadium. In addition to the ball, the cameras will monitor 29 points on the players’ bodies and send data 50 times per second about their exact position. If a player is offside, the sensor will first signal the VAR booth. The system was piloted last year with the Arab Cup and the Club World Cup.

The use of video assistant referee technology was first seen in Russia during the 2018 World Cup. It helps the on-field referee make correct decisions through video replays of the game. In that case, a special team in an off-field studio analyses video replays. This type of process has been used in the game of cricket for a long time. Basically, this system is used to make the various decisions made by the referee more accurate. For example, whether a goal has been scored and whether any rules have been broken in the process of scoring; penalty and red card decisions; etc. Whenever the head referee on the field is in doubt about a decision, he can ask the VAR through the headset for a review. The use of this technology brings more transparency to game results and judging.

Brazil used goal-line technology for the first time in each of its 12 stadiums at the 2014 World Cup. It should be noted that a clear goal by English team player Frank Lampard against Germany caused great controversy at the 2010 World Cup in South Africa. In light of Lampard’s incident, FIFA decided to use goal-line technology. This year’s World Cup also has goal-line technology, but it is more modern and consists of 14 cameras. Through them, fans will be able to see 3D vision from different angles. This technology was first introduced at the 2014 World Cup. Incidentally, Hawk-Eye is a British camera-based system and the first company to receive a FIFA license.

This camera is widely considered to be the most accurate, reliable and experienced goal-line technology provider. Paul Hawkins, who invented ball-tracking devices used in cricket, snooker and tennis, combined this camera with the idea of ball-tracking in football. And ‘Goal-Ref’ is a Danish-German technology that uses a magnetic sensor attached to the goalpost to determine the trajectory of the contested ball and displays a perfect image. Through the mobile apps, there is the ‘Haya Card’, which will give ticket holders free use of public transport on match days and various other benefits.

Qatar has installed special technology to control the temperature and also built seven air-conditioned stadiums. However, a stadium has been built completely differently and named ‘Nine Seven Four’. The number is basically Qatar’s international dialling code, and the stadium is built with 974 containers. About 40,000 spectators can sit together and watch the game in this stadium. This ground is built to pay tribute to the history of Qatar, its trade and all the traditions of the Qataris. About 10 kilometres from the capital Doha, this special stadium is built in the eastern coastal city of Ras-Abu Aboud, which will be demolished after the World Cup. The stadium does not need an air cooler as it is located on the seashore and cold air will be brought in through the pipe line.

To ensure the safety of the game, the whole country is under the watch of 15,000 cameras. The Aspire command control centre has over a million travellers under surveillance. The technology is revolutionising the sport of live-tracking performance, which captivates billions of viewers worldwide outside the stadium. With this in mind, goal-line technology has been used in Brazil in 2014, VAR in Russia in 2018, and now in Qatar. ‘Semi-automated’ offside and apps technology  takes less time to make the right decisions than before, so the game will be more perfect, transparent, alive and dynamic.

Dr M Mesbahuddin Sarker is professor and director of the Institute of Information Technology in Jahangirnagar University.