Microsoft has revealed the games they’ll be adding to Xbox Game Pass in the first half of May, and there’s some great stuff on the way! Microsoft will be serving up Wolfenstein II: The New Colossus, The Surge, Wargroove, Surviving Mars, and more! New-release title For the King is also coming our way – in fact, Game Pass subscribers get to play the game three days early. 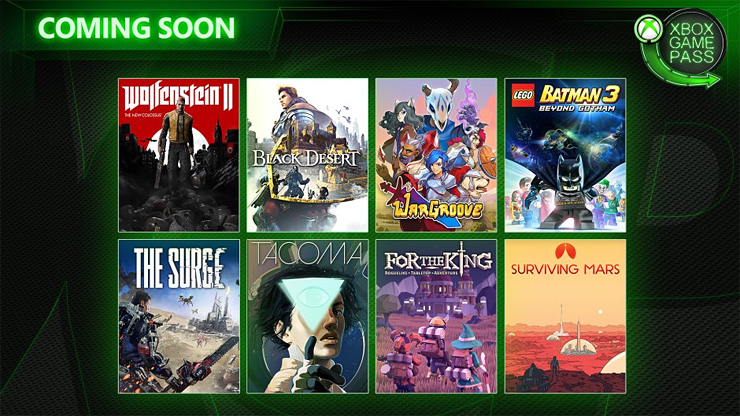 You can check out official Microsoft descriptions for the new Game Pass titles below:

Wolfenstein II: The New Colossus (May 2)

Play as war-hero BJ Blazkowicz and lead the second American Revolution by recruiting a band of resistance fighters to hunt down the evil Frau Engel and dismantle her Nazi war machine. Armed with powerful weapons and dynamic combat abilities, fight your way across an American landscape twisted by Nazi occupation. Only you have the guns, guts, and gumption to liberate America.

When war breaks out in the Kingdom of Cherrystone, the young Queen Mercia must flee her home. Pursued by her foes, the only way to save her kingdom is travel to new lands in search of allies. But who will she meet along the way, and what sinister challenges will she face?

You must construct a self-sustaining colony capable of supporting human life on Mars. This is no walk in the park thanks to the Red Planet’s hostile environment, limited access to resources, and lack of breathable air – all not exactly human friendly. To ensure your colony’s survival, you’ll need to balance everything from life support to resource management and more.

The Venturis Corporation wants its AI back. That’s where you come in. At the heart of Tacoma is the facility’s digital surveillance system, which has captured 3D recordings of pivotal moments in the crew’s life on the station. As you explore, echoes of these captured moments surround you. You’ll use your ability to rewind, fast-forward, and move through the physical space of these complex, interwoven scenes to examine events from every angle and reconstruct the multi-layered narrative.

Experience fast-paced combat and an immersive story within an expansive world just waiting to be explored. During your action-packed journey you are accompanied by a Black Spirit – a companion whose destiny is intertwined with your own – as you discover the secret of the Black Stones and the history of their corrupting effects in this massive MMORPG on Xbox One.

Embark on a perilous adventure in this strategic RPG that blends tabletop and roguelike elements in a challenging journey spanning the realms. Set off on a single player experience or play cooperatively both online and locally as you attempt to discover the mystery surrounding the King’s death and bring order back to the realms. And as an added member benefit, Xbox Game Pass members can play the game three days before its launch, starting on May 7!

Welcome to CREO, the megacorporation saving our world! You’re knocked out by a catastrophic event during your first day on the job and wake up in a destroyed section of the complex. From robots gone haywire, out of control augmented co-workers, and rogue AI – everything wants you dead. Equipped with a heavy-grade exoskeleton, you must defy deadly enemies and huge bosses in visceral melee combat.

The Caped Crusader joins forces with the superheroes of the DC Comics universe and blasts off to outer space to stop the evil Brainiac from destroying Earth. Using the power of the Lantern Rings, Brainiac shrinks worlds to add to his twisted collection of miniature cities from across the universe. Now the greatest superheroes and the most cunning villains must unite and journey to different Lantern Worlds to collect the Lantern Rings and stop Brainiac before it’s too late.

Xbox Game Pass grants players access to more than 100 Xbox One and Xbox 360 games for 10 bucks a month — you can check out a full list of available games here. New subscribers can get their first month of Game Pass for only $1.

What Xbox Game Pass titles will you be tackling over the coming weeks? This lineup is all killer, no filler, but I’d particularly recommend Wolfenstein II, Wargroove, and Tacoma.